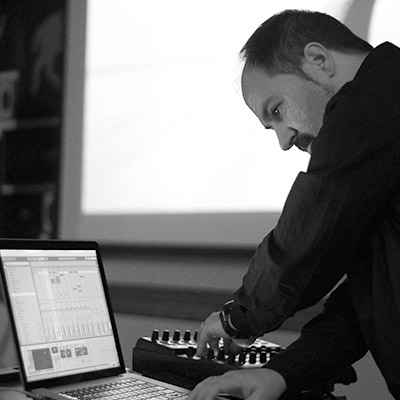 richallmusic.com
Richard Hall is a musician, composer, sound artist, digital-video artist and music educator based in central Texas. His main interest is performing live laptop “art” music in concert settings. Richard has performed at several national and international conferences and festivals including those sponsored by the College Music Society, the National Association of Composers USA, the Association for Technology in Music Instruction, the International Society of Improvising Musicians and the Texas Society of Music Theorists.

His music has also been featured at conferences by the National Flute Association, the Society of Composers, Inc., the Vox Novus 60x60 Contemporary Music Project, the Electronic Music Midwest Festival and the International Computer Music Association as wells as the Sonic Art Oxford Festival in England, the LOOP Video Art Festival in Spain and the Edinburgh Festival Fringe in Scotland. His electronic music has been used at art museums in many major US and European cities. Richard has received numerous commissions throughout the country, scored several independent films, written for television series, documentaries and theatrical productions and has pieces published by Dorn Publications and GoFish Music.

His music has also been recorded by the Czech Philharmonic Orchestra for ERM Media and the Wild Basin Winds with the Emmy award-winning children's group The Biscuit Brothers. He is also the recipient of several ASCAP Plus Awards grants and a bronze medal from the Global Music Awards His musical collaborations with dancers have been featured in Mexico, Uruguay, Romania, Scotland, Guatemala, and Berlin, Germany. Richard is currently a Senior Lecturer of Music at Texas State University-San Marcos. His teaching duties include Music Composition, Electronic Composition, Music Technology, and Humanities. He also directs the Texas State Mysterium for New Music Ensemble.