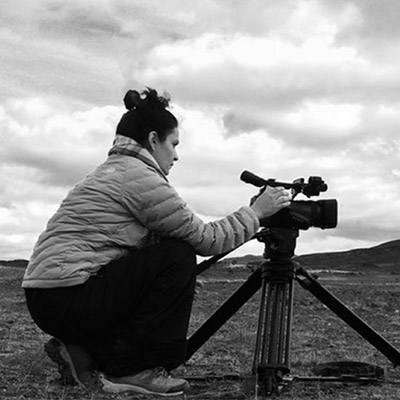 www.anabaer.com
Ana Baer Carrillo is a Mexican American video-choreographer living in the US. Her work is composed of a variety of dance for camera, choreography, as well as interdisciplinary performances. She works across several fields and genres, maintaining a clear dance-centric conceptual line in her research agenda. Internationally active since 1990, Ana Baer Carrillo has been commissioned to create work by the John Cage Foundation, Stadttheather Giessen and Tanz Compagnie Giessen in Germany, Universidad Michoacana de Morelia and Contra Danza in Mexico, among others.

Baer Carrillo is a founding member of Avant Media and Merge Dance Company. She has been Artistic Director of Sans Souci Festival of Dance Cinema since 2004. In 2014 she co-founded the Intercontinental cross-disciplinary group WECreate Productions with Artist Heike Salzer to expand her explorations on site-specific screendance.

She is a proponent of Practice as Research, her artistic inquires include: collaborative arts production, notions of identity/home/roots, and Post-Colonial theories through embodied practices. She holds a teacher certificate from the Royal Academy of Dance, a Bachelor’s of Fine Arts in Choreography from Centro Nacional de las Artes, and a Master’s of Fine Arts in Dance with an emphasis on Video from the University of Colorado at Boulder. Currently, she is an Associate Professor at Texas State University.